Well, this was on my first national tour. THE PAINTED BRIDE is one of the biggest, the most mainstream theatres I have ever played in! They only booked me because FRANKLIN FURNACE in N.Y.C. booked me. They were extremely nervous. But beautiful lighting! I blocked off the seating and had the audience sit on the huge stage. The local cast was great, especially when the theater [which got them for me] hadn't told them nudity and eroticism were involved.
Check out the discussion with the audience at the end. One guy accused me of using unfair tactics by using my naked body [disabled] in my performance... It was a cheap trick going for shock value, according to him. Laughing, I replied I LIKE SHOCK VALUE, THE CHEAPPER THE BETTER! Of course the guy maybe was having a jealous reaction because during the performance his girlfriend cuddled nude me in her lap. 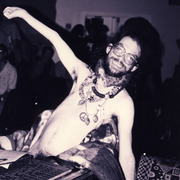